2018 -- Transmitting a Heritage: The Teaching of Ancient Languages from Antiquity to the 21st Century

For the Fourth Polis Institute Interdisciplinary Conference, held on April 16-17, 2018, the over-arching theme took a pedagogical turn: "Transmitting a Heritage: The Teaching of Ancient Languages from Antiquity to the 21st Century." In this year's edition of the Conference, more than thirty scholars and language educators gathered and/or submitted papers for the Conference's various talks and presentations that covered the teaching of Latin, Greek, and Hebrew through the centuries, learning how to write in ancient Sumer, the depiction of Latin teachers in film and historical themes, among others. Four continents were represented in this Conference with scholars coming from the Netherlands, Croatia, the United Kingdom, Bulgaria, Poland, Sweden, France, Italy, the United States, Brazil, Argentina, Israel, and Japan. A book containing the proceedings is to be published in 2021. 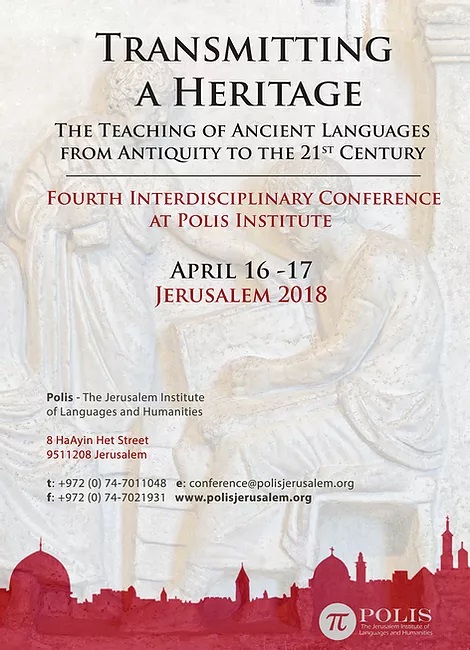 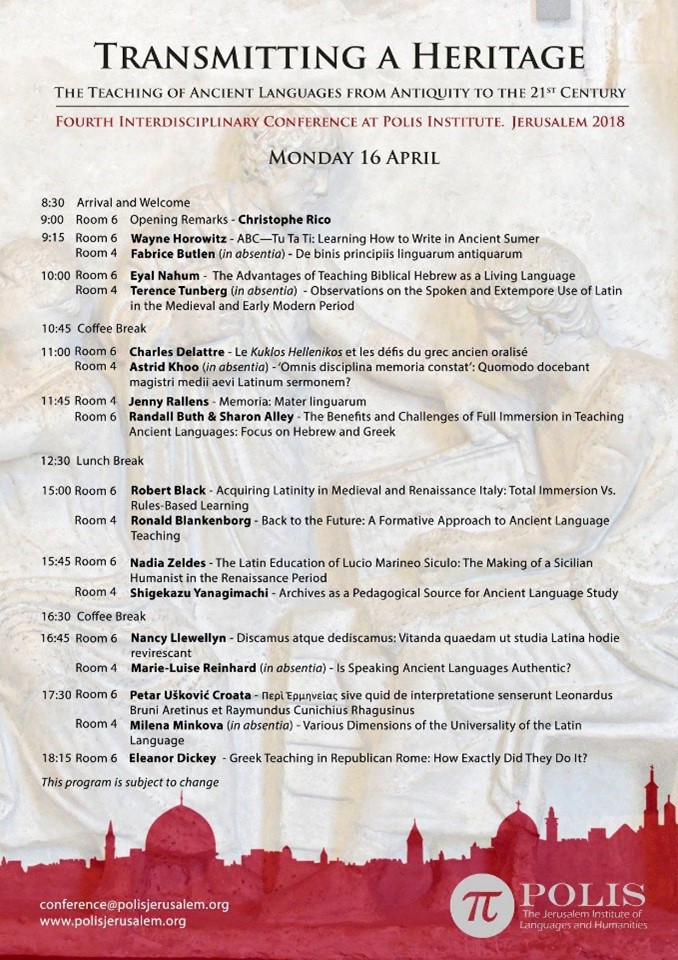 The Cours de Linguistique Générale was published in June 1916, three years after the death of Ferdinand de Saussure. The text, which is based on the class notes of Saussure’s students, marks the beginning of general linguistics. Ever since its publication, this work has become a reference book for language sciences and humanities in Europe and all over the world.

Since the first translation of this work (into Japanese, in 1928), the book has been translated into some 30 different languages: it has deeply marked all linguistics schools in the first half of the 20th century before becoming the inspiration of European structuralism.

The Polis Institute held an international conference on March 31 – April 1, 2016, in Jerusalem, to mark the centennial of the publication of this seminal work. The conference had interdisciplinary character, gathering specialists who explored the background and influence of the CLG, the concepts and dichotomies developed in this book, and the specific relations between sign and meaning. A book containing the proceedings of this conference was later published. 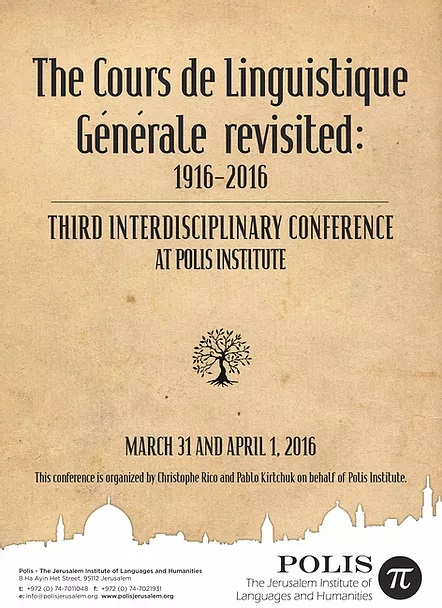 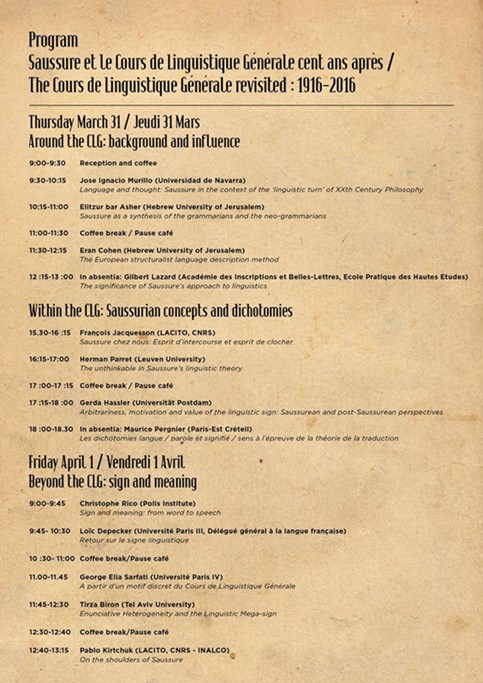 2015 – The Library of Alexandria: Dreams and visions, Rise and Splendor, Fall and mysteries

Created and developed by the Ptolemaic kings, the Library of Alexandria was regarded as the world's main center of scholarship from the 3rd century BC until at least the reign of Cleopatra (48-30 BC). The dream to establish a gigantic library that could assemble all known texts of the Hellenistic period, the outstanding achievements of the scholars who worked inside its walls, and, finally, the mysteries surrounding its disappearance, have bestowed an almost mythic status on this monumental library.

Where was the Royal Library exactly located? What kind of texts were kept in that library? To what extent did the Library of Alexandria become a meeting point for different languages and cultures? Should we distinguish between the Museum and the Library from an institutional point of view? Were the book collections housed in separate buildings? What caused the destruction of those collections and how much was lost? Why did some ancient authors remain silent about the Library's disappearance?

Polis - The Jerusalem Institute of Languages and Humanities held an international conference to seek answers to these questions. The 2015 conference on the Library of Alexandria gathered historians, archaeologists, and linguists, as well as specialists on the Septuagint and on Greek literature. A book presenting the proceedings of the interdisciplinary conference was later published. 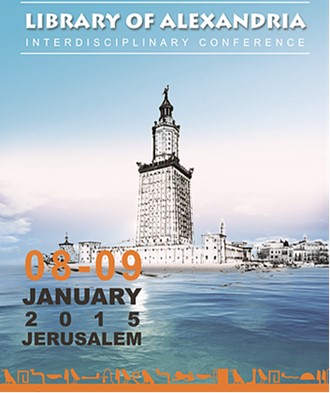 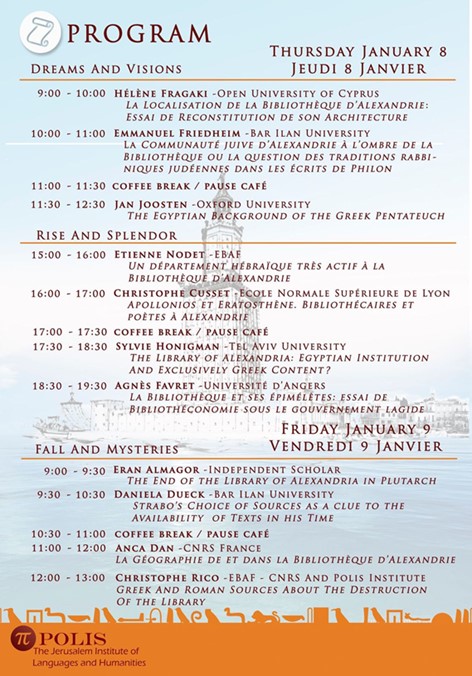 Despite the fact that writing has arisen independently many times in various different regions of the world, including Egypt, Sumer, China, and Mexico, the concept of the alphabet was invented only once, somewhere between Egypt and Phoenicia, with all known alphabets going back to this single source. While it is possible, up to a certain point, for scholars to provide an answer as to how the alphabet came about, it is much more difficult to understand the cause of its origin: why did it come about?

In February 2013, Polis – the Jerusalem Institute of Languages and Humanities invited some of the leading experts studying the origins of the alphabet to Jerusalem for an interdisciplinary debate on this topic. Although the birth of the alphabet has been the subject of numerous international conferences and symposia, studies offering a linguistic, sociological or psychological perspective on the development of writing are extremely rare.

A volume (click here to access the publication page) was published in 2015, bringing together the proceedings of this conference. It shows that a broad consensus is emerging concerning the main factors and circumstances that surrounded the birth of the alphabet, accounting for such facets as the date of the first-known alphabetic inscriptions, the cultures involved in its invention, and the influence of the linguistic structure of the language spoken by the inventors. 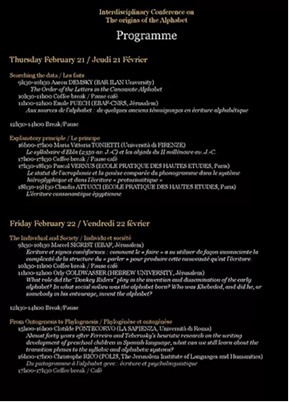