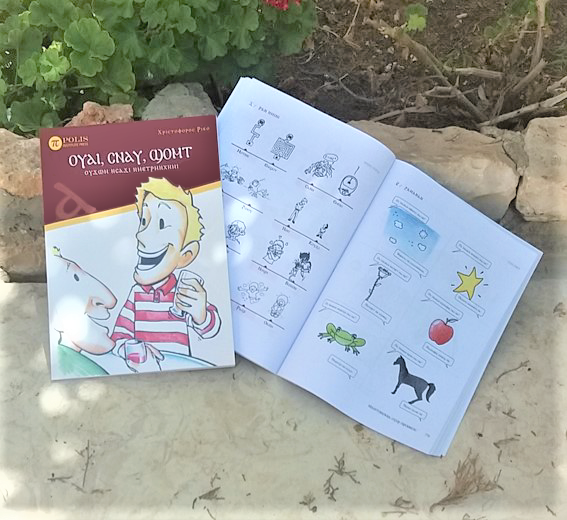 We are pleased to announce a new publication from the Polis Institute Press, ⲞⲨⲀⲒ, ⲤⲚⲀⲨ, ϢⲞⲘⲦ: ⲞⲨϪⲰⲘ ⲚⲤⲀϪⲒ ⲚⲘⲈⲦⲢⲘⲚⲬⲎⲘⲒ (One, Two, Three: Practice Book in Spoken Coptic), which is available in paperback at Amazon here.

We are pleased to announce a new publication from the Polis Institute Press, ⲞⲨⲀⲒ, ⲤⲚⲀⲨ, ϢⲞⲘⲦ: ⲞⲨϪⲰⲘ ⲚⲤⲀϪⲒ ⲚⲘⲈⲦⲢⲘⲚⲬⲎⲘⲒ (One, Two, Three: Practice Book in Spoken Coptic), which is available in paperback at Amazon here.
Since the second half of the 20th century when Pope Cyril VI of Alexandria started a national Church-sponsored movement to revive Coptic, the language has enjoyed a renaissance.  And, many more scholars have gained a direct understanding of texts written by prominent saints of the Coptic Church such as Anthony the Great, Pachomius the Great and Shenoute.

ⲞⲨⲀⲒ, ⲤⲚⲀⲨ, ϢⲞⲘⲦ draws on a new technique for language acquisition developed at the Polis Institute of Jerusalem, the Living Sequential Expression (LSE), which was inspired by two ideas of François Gouin: the influence of sequence in the learning process, and the need to express basic human experience through the language we learn.

This is why most of the pages of ⲞⲨⲀⲒ, ⲤⲚⲀⲨ, ϢⲞⲘⲦ show sequences of actions to be heard and seen, and then enacted or retold by the student. These sequences respect the inner structure and dynamics of the target language. By doing so, the process of internalizing a language will thus be all the more swift and efficient as language features are acquired according to an overall natural sequence, given that specific pragmatic features naturally precede others. This is what the pragmatic progression of ⲞⲨⲀⲒ, ⲤⲚⲀⲨ, ϢⲞⲘⲦ intends to reflect.

The book is the result of many long years of research, reflection, workshops, classes, and dialogues with students, language teachers, illustrators, and designers.  All the translation work was done by a special team at the Polis Institute. The book also marks the latest addition to our One, Two, Three... series of practical language learning textbooks, joining Hebrew.  Other planned languages for the series include Akkadian (the language of the cuneiforms), Latin, koine Greek, Spanish, English, and French.