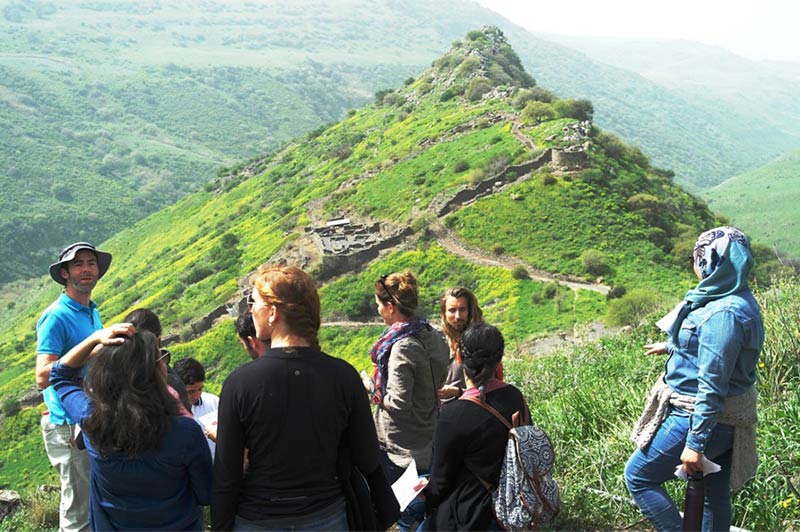 Our field trip to Gamla, “the Masada of the North”

The first thing that comes to our minds, at the mention of the Great Jewish Revolt (66–73 CE), is of course Masada, whose tragic fate and memory were made immortal by Josephus’s account.

If for no other reason, the comparison (accurate or not) is tempting because being unsure where to stand on the issue is a good excuse for one to go and see for oneself. That’s what we did that day.

“Gamla” means “camel” in Aramaic, a most adequate name for a city standing over a camel-shaped ridge in the middle of the Golan Heights.

Bounded by deep gorges (where in the end some 5000 inhabitants found death, says Josephus, “in a suicidal frenzy”), Gamla managed to resist the initial besiege of Agrippa II for seven months. Its topography and the fortified wall around made the people of Gamla extremely confident in their ability to resist any possible attack. Clearly too confident, as Josephus would later suggest:

“Gamala (…) relied upon the difficulty of the place (…) they had such confidence in the situation of the place, that they thought the enemy could not be too many for them”. (Wars IV, 1.2)

A tragic mistake, of course, but how could they have known? As we ourselves glanced at the valley from the top of the hill that overlooks the city, right where the Romans must have stood, we realized that for Agrippa II it was opus:impossibile.

But then came Vespasian with three Roman legions under his command. Now they were about 16,000 Roman soldiers against 9,000 people defending the city. The legions built their camps over the top of the hill facing the city, a privileged place from where they could keep an eye on their enemies’ movement. Vespasian, however, also ordered the bottom of the mountain to be occupied by trenches built in strategic positions and soldiers ready for action.

Although outnumbered by the Romans, Gamla still resisted for one month, after which time Vespasian’s battering rams managed to breach the city wall.

After breaching the walls, the Romans rushed into city but again at least some were pulled back. Other legionnaires didn’t even have the chance to flee: they got trapped and killed inside the city. Gamla seemed invincible.

At that time, however, the city was already short on food and water. Since food provisions had been gathered and reserved for the fighting men, ordinary citizens began to starve. “Those that were of the bolder sort, says Josephus, fled away from the city through impracticable valleys and subterraneous caverns, while the more infirm perished by famine.” Their moral and confidence, we can imagine, was no longer the same.

In the meantime, Romans continued attacking, “till the two and twentieth day of the month Hyperberetmus, when three soldiers of the fifteenth legion, about the morning watch, got under a high tower that was near them, and undermined it.”

As the tower collapsed with a great noise, fear immediately took over. People ran here and there as though the enemies were already inside the city, and Josephus even mentions an ill man who died that day out of fear.

But the Romans waited for the next day, when finally Titus (Vespasian’s son, who by that time had returned from another mission) entered the city with two hundred horsemen and some footmen. The Romans killed 4,000 that day (men, women and children), whereas another 5,000 people, according to Josephus, committed suicide by throwing their children, wives and themselves “down the precipices into the valley beneath”.

Gamla was never rebuilt. The ruins were abandoned and, as centuries passed by, even its location would be forgotten. It could have faded into utter oblivion, had Josephus not written his account.

But then, 1900 years after its fall and in the aftermath of another war (the six-day war), Gamla was rediscovered by the Israeli historian Yitzchaki Gal. Later archaeological excavation confirmed the city’s location. On the top of the hill facing the ruins now stands a National Park encompassing a Nature Reserve and the archeological sites.

Six coins have been found in Gamla in which we can read the inscription “For the redemption of Jerusalem the Holy”. Those coins were a political statement in themselves, trying to convey the idea of Jewish unity against the enemy.

The synagogue excavated at Gamla, dating to the I Century AD, is among the oldest ever found.