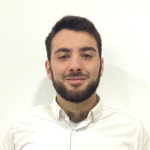 Polis - The Jerusalem Institute of Language and Humanities is delighted to celebrate our ninth anniversary.

Polis was founded on 9 May 2011 by Christophe Rico and other linguists whose goal was to revive the study of the Humanities and increase the teaching of Ancient Languages.

From its humble Jerusalem beginnings, Polis has grown over the past nine years to become a well-respected academic instiution in the fields and now teaches a variety of languages and academic courses.

Our courses now include Coptic, Ancient Greek, Syriac, Latin, Hebrew and Arabic in addition to many theoretical courses taught as part of our Academic Programs.

While sadly we had to mark our ninth anniversary virtually - with no students present - we hope that we will be able to return to frontal teaching soon and we look forward to seeing the halls of Polis filled once more.

Polis is also preparing for a record number of Academic students next year, with our MA Degrees in Ancient Philology and Near Eastern Languages, and our Certificates in Arabic and Ancient Greek Fluency, already having recieved more students than last year.

There is still time to apply for scholarships, as Polis has extended applications this year until May 31 due to the situation surrounding the Coronavirus.

In this video Christophe, and Kelsey Coia - a second year student in Polis' Master's Degree in Ancient Philology - talk about their time at Polis.

We look forward to seeing all our students back at Polis soon. If you would like to support out work financially - we would be grateful to receive any donations which you can make on our website.