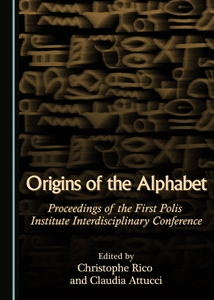 Origins of the Alphabet

Despite the fact that writing has arisen independently many times in various different regions of the world, including Egypt, Sumer, China, and Mexico, the concept of the alphabet was invented only once, somewhere between Egypt and Phoenicia, with all known alphabets going back to this single source. While it is possible, up to a certain point, for scholars to provide an answer as to how the alphabet came about, it is much more difficult to understand the cause of its origin: why did it come about?

In February 2013 Polis – the Jerusalem Institute of Languages and Humanities invited some of the leading experts studying the origins of the alphabet to Jerusalem for an interdisciplinary debate on this topic. Although the birth of the alphabet has been the subject of numerous international conferences and symposia, studies offering a linguistic, sociological or psychological perspective on the development of writing are extremely rare.

This volume, bringing together the proceedings of this conference, shows that a broad consensus is emerging concerning the main factors and circumstances that surrounded the birth of the alphabet, accounting for such facets as the date of the first-known alphabetic inscriptions, the cultures involved in its invention, and the influence of the linguistic structure of the language spoken by the inventors.