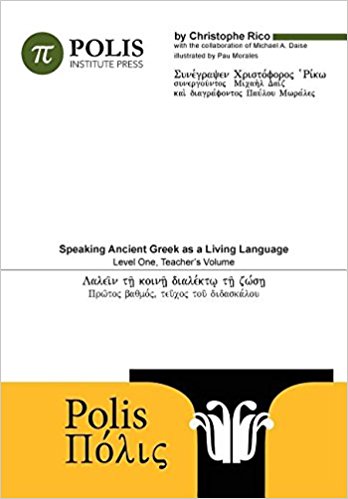 The goal of this book is to enable the student to read ancient Greek without the use of a dictionary or translation, and to read as fluently as one could read in French or Spanish. For educational purposes, ancient Greek is treated as a living language in this text. Polis applies teaching methods commonly used for modern language acquisition to ancient Greek: total oral immersion, total physical response (TPR), gradual complexity of dialogs and stories, and gradual grammatical progression. Whether used by a self-taught individual or by an instructor with a group of students, this first level book submerges the student within the language. The audio files that are available to download from the Polis website will help the student internalize grammatical forms and vocabulary. As only Greek is heard by students, they are unable to rely on an intermediary language and are compelled to employ the new skills they have acquired through this text. Polis teaches Koine Greek, the dialect of Hellenistic literature from Alexander the Great till the end of Antiquity and in which most ancient Greek texts were written. The first edition of the Polis method has been published in French (Editions du Cerf, 2009), Italian (Edizioni San Paolo, 2010) and German (Helmut Buske, 2011). The English edition of Polis fully revises the first edition and expands its original twelve chapters to twenty. This volume is intended for self-taught readers. It comprises a handbook of grammar with the grammatical lexicon, declensions and conjugations studied in the first volume, the keys to all the exercises, a list of differences between Attic and Koine dialects, and all text translations.