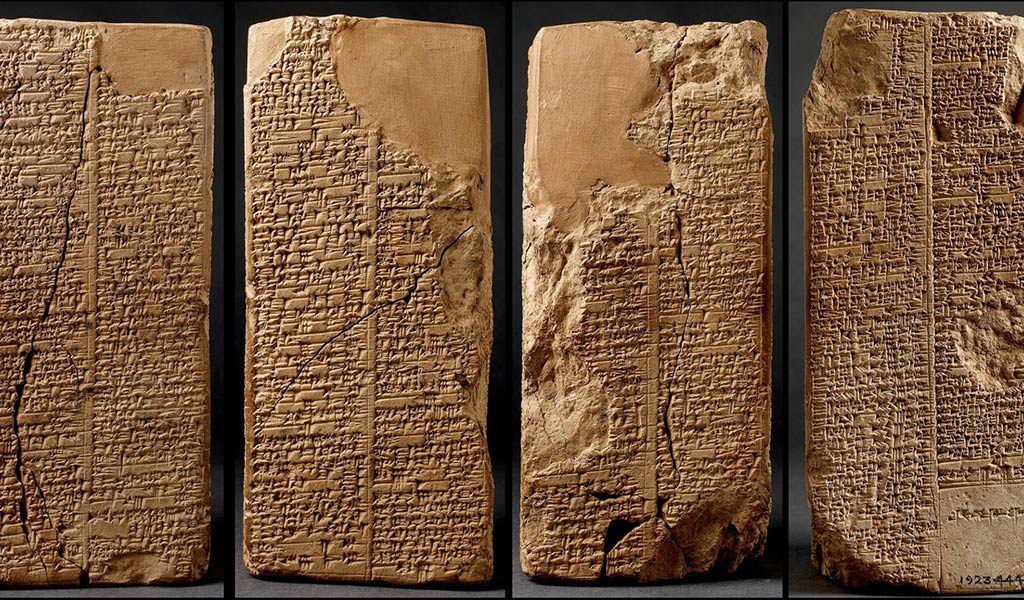 The Sumerian Verb: A Workshop for the Non-Sumerian Speaker

Professor Wayne Horowitz, who has been working as a Professor of Assyriology at the Hebrew University of Jerusalem since 1986, gave an open lecture at Polis Institute on Saturday, the 3rd of December, at 19:00. The topic of the lecture was "The Sumerian Verb: A Workshop for the Non-Sumerian Speaker”, and was given as part of a course in Sumerian that began in Polis on Tuesday, 29 November 2016.

The lecture began with a concise presentation of features of the Sumerian language. Sumerian existed in Mesopotamia; its written form dates back to 3200 BC, but is thought by scholars to have existed even earlier, though undocumented. Sumerian was used as an official language in various documents and literature until 2000 BC, followed by a period where it remained a spoken language until 1600 BC. During the years of its active usage it gained status as an academic language, and continued to be studied by Akkadian scholars until the first century AD. Thus, Sumerian survived long enough to be transliterated into Greek. Ancient scholars also documented Sumerian grammar by writing it down on tablets.

The lecture offered other fascinating insights that occur in Sumerian. According to the latest scholarship, Sumerian is an isolated language, meaning it is not similar to any known language family (in comparison to many other languages in the Ancient Near East that were either of Indo-European pr Semitic origin). Thus Sumerian was a unique language that was used and also survived in an area dominated by other non-related languages. Akkadian, the oldest attested Semitic language- which later became the most widely used language in the Ancient Near East- was first written down in the middle of the third millennium BC. Documents from that era indicate extensive evidence for linguistic influence and exchange between Akkadian and Sumerian.

The main focus of the lecture was to understand the phenomena taking place with verbs. The participants of the lecture were introduced two kinds of Sumerian verbs, hamţu (‘quick’, completed actions, perfect) and marû (‘slow’/‘fat’, incomplete, imperfect, past/present/future), as defined by Akkadian grammarians. Extensive attention was paid to understanding the obligatory agreement between  noun and verb according to case (genitive, dative, locative, ergative, terminative and ablative). Moreover, a cuneiform reading exercise took place, and participants were given the opportunity to read an ancient, original cuneiform tablet in Sumerian.

The questions of the complexity and subjectivity of studying such an ancient language, with  limited availability of literary sources, was raised, however, no clear academic consensus has been reached concerning the origins of Sumerian and its grammar. Scholars today find several, often contrasting versions of Sumerian grammar books, and still no clear evidence of the grammar nor the history of the language exists. As a result, the study of Sumerian is rather theoretical. Likewise, one cannot be absolutely sure about the pronunciation of the words, even if there are factors that could be used to argue for the language having been a tonal language. Other challenges of language analysis can be found in the cuneiform script which was used in language documentation, but even so, one cannot know to what extent the writing system allows the grammar and the pronunciation of the language to be reflected. Perhaps that is what makes Assyriologists so genuinely curious and devoted to the study of these languages.

The origin of Sumerian interests a great amount of scholars. Professor Horowitz presented a few suggestions of languages with which Sumerian possibly could have some common ancestry, with which it shares some surprisingly similar linguistic features. According to comparative linguistics, Sumerian could possibly be of Central-Asian origin, yet  no official claims have been made. Sumerian is known as an ergative and, probably, tonal language isolate, one may wonder how, where, and in what conditions the language developed and, whether it might after all share common ancestry with other, roughly similar languages in some way. Even though the analysis is highly speculative and drawing definite conclusions is near impossible, it is rather exciting to imagine the potential reasons for these resemblances, even without claiming a linguistic affiliation exists. It is fully possible and utterly academic to argue on grammar, discuss contrasting opinions and allow oneself to be bothered by the lack of consensus, yet in order to understand ancient languages, such as Sumerian, it is preferable to focus on accumulating and studying the phenomena, which is found in the evidences. In this way, we may achieve more and further develop the study of ancient languages.